BFIG 2011 Season Recap: We Are Not Immortal 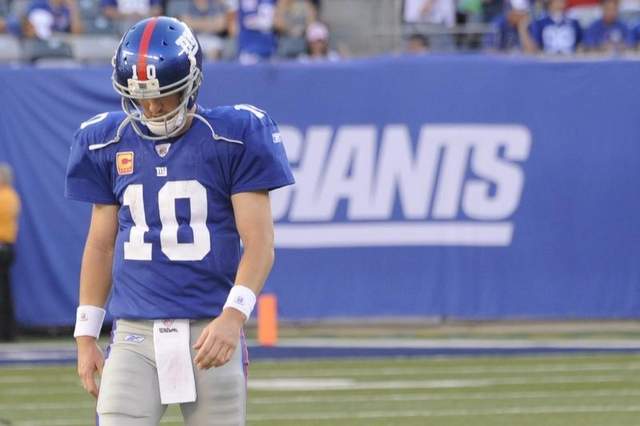 After two seasons where a field of less than 100 entrants made it 17 weeks and 16 weeks, respectively, The Commish was left to wonder whether his network should collectively quit its day jobs and start an offshore gambling operation.

Turns out just one man had what it took to stop us. His name was Eli Manning.

Quite simply, survivor pools aren't supposed to last the full season every time. Not in the League of Great Parity, and especially not when there are fewer than 100 people participating.

After four weeks, the script read much the same - roughly half the pool had been knocked out in the always-tough-to-pick early weeks. But Week 5 was especially threatening. There wasn't a game with a spread larger than 10 points.

The Seahawks were the 10-point underdog, and, well, they had looked pretty awful to that point. In Week 2, they lost 24-0 at Pittsburgh. Seattle's opponent was the New York Giants (2011's eventual Super Bowl champs), who were on an impressive three-game winning streak.

The game looked to be a sanctuary amid the viciously capricious NFL waters.

You should know by now that every time you say something like that, the Survival gods are listening.

Eli Manning threw three picks and also lost a fumble. A full 78 percent of the pool went down on this game alone. Combined with the Texans' loss on the final play of the game, and the pool had just 11 people remaining.

Dave Zito, a BFIG original, saw an opportunity. Win the pool, and he not only gets the title belt, but also likely becomes the winningest player in BFIG history - a title held at the time by Aaron Hawkey, Zito's good friend and sports rival.

Four weeks went by and only one more person dropped out. There was, however, a clear pattern developing: Seven of the 10 survivors had picked the undefeated Packers during the first nine weeks. Zito, Ky Ryder, and Annie Choi were saving Green Bay for a later time.

Week 10 was the time for Zito. Annie and Ky went with the Eagles (along with six others), helping create one of this pool's most important rules: Never pick the Eagles with the season on the line.

Nine dropped out (creating a second-place pickoff in Week 11), and after the Packers annihilated the Vikings 45-7 on Monday night, David D. Zito was your third BFIG champion.

Don't get The Commish wrong - this pool contains unmatched survival picking skill. But 2011 proved that 17 weeks is definitely not the norm.

Despite entering Week 10 in third place, he won the margin of victory crown (+199) by 35 points over Momma Survival.

These fellas watched their Chefs get embarrassed by the Bills, 41-7, in Week 1. Then, with new life, they picked the Bucs in the Second Chance Pool and watched them lose 48-3 to the 49ers in Week 5. And you thought a -79 margin of victory wouldn't get you an award...

With seemingly 90% of the survival world going down with Eli and the Boys in Week 5, Pete and Tom were watching their Houston Texans rack up 500 yards of offense yet somehow trail Oakland in the 4th quarter. With seconds left on the clock, Houston was inside the 10-yard line and the Raiders inexplicably sent just 10 men onto the field. Despite the man advantage against a defense that had shown it couldn't stop them even with a full squad on the field, Matt Schaub threw a pick in the endzone to end the game.

We had just three Moxies handed out this year. Unfortunately, the Moxie crew went 0-3. (Maybe there's a correlation there?) We had a few drumstick winners who walked away with victory, but alas, drumsticks are not Moxies. If Commish has just ONE wish this holiday season, it's to bring back the Moxie in full force next year.

Just remember folks, you can't put money on your mantle. But you can absolutely put a Moxie up there. These three fine people now have one. What's a Moxie look like, you ask? Whatever the hell you want it to look like, champ. You have Moxie. It'll look good.

That makes it two years in a row for the Green and Gold. Five weeks picked, five weeks survived. 38 total picks, 38 wins. The championship pick. And the team Annie Choi and Ky Ryder regret not picking in the decisive Week 10.

The Philadelphia Eagles (1-3 this year) gave the G-Men a late run for their money, but at the end of the day, when you take out 78% of the field by losing to the Seahawks, at home, with Marshawn Lynch NOT in beast mode, you've pretty much locked up this award.