BFIG 2012 Season Recap: The Fail Mary Didn't Describe Us, After All 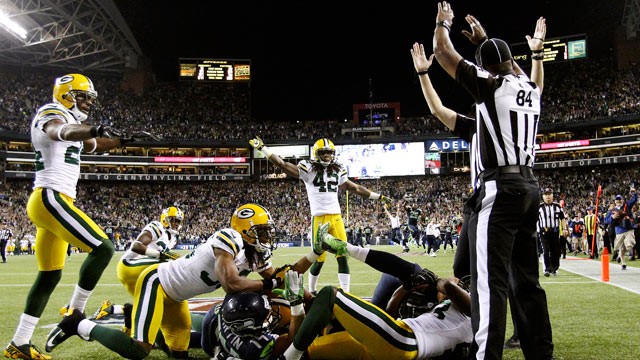 What looked to be a season-long Fail Mary turned into a referendum on season-long survival...

2012 BFIG: The Movie was like a horror film in reverse. We started with several weeks of sheer terror, then hit an oddly long stretch of peace, and ended with a bang.

A full 103 survivors took the "safe" route in Week 2, picking the Patriots to steamroll the lowly Cardinals. If only it was that easy.

The Patriots became just the 15th team in the last 10 years to lose when favored by at least 13 points. The carnage continued in Week 3, and we were left with just 31 title poolers going into Week 4.

With just 31 remaining survivors and 14 regular season weeks left, you had to figure this was headed for a 2011-esque ending (Week 10).

But while we had some minor upsets and surprises along the way, three brave gentlemen made it all the way through the regular season unscathed.

Thus, BFIG prepared for its first-ever playoff pickoff to determine a champion. Alex Harris (the Wolverine), Colin Smith (the Buckeye), and Mike Preuss (the Hoosier) were set to do battle.

After victories by the Packers, Seahawks, Ravens, and Texans, Alex Harris emerged from the BFIG battlefield with nary a scar. A perfect 21-0 season gave Mr. Harris the Belt and a spot in the BFIG Hall of Fame.

A +141 over the final five weeks of the season catapulted Alex to a Margin of Victory title. His +281 for the season puts him behind only Josh Huff's +288 in 2009. Mike Preuss finished second with +277, good for fourth place all time.

This is an accomplishment and don't let anyone tell you otherwise. Most people don't get any awards. Buffalo's 20-point surrender to the Jets in Week 1 made for the worst MoV of the season, but definitely not the worst MoV ever (-34 in 2011, with a first-round Second Chance MoV of -45).

Remember that Seattle-Green Bay game in Week 3? Remember how outraged the world was? Imagine how Justin felt, knowing a correct call would have made him one of just 32 remaining.

Week 14: Seahawks 58, Cardinals 0. Yes, the same Cardinals that beat the Patriots in Week 2. This was the largest MoV in BFIG history.?

Sure, there were doubts about Peyton Manning's neck and his arm strength. But he's still Peyton Manning. Kavodel picked against Peyton and his soon-to-be 13-3 Denver Broncos in Week 2. Atlanta pulled out the victory, and Kavodel earned himself an award by being the only person in BFIG history to bet against The Manning Not Named Eli.

Sure, it was the Second Chance Pool, but picking St. Louis, Cleveland, and Oakland to start it off? And winning all three en route to an eventual title? I don't care what the stakes are, that's an award-winning pick line. Always remember, Moxie wins you championships.

What's that, you say? The Browns were picked against six times. They lost all six times. BFIG's record in games involving the Browns was 117-0. I never said the Best Team had to be, well, the best team.